Millennials and their buying habits have been under the scrutiny of the real estate industry for years. We’ve watched them go from a minority to the largest group of buyers in the market, but now

is taking its first steps into the housing market, and it’s time we learned more about this new group of first time buyers.

In an effort to do just that, Homes.com polled more than 1000 adults from Generation Z aged 18 to 24 years old. Questions focused on Generation Z’s expectations about the home buying experience and their home buying plans.

Members of Generation Z were born between 1995 and 2012, placing the oldest members in their early 20s. They came of age in a digitally connected world, during an era of full employment, which may give them a more positive financial outlook compared to Millennials. Generation Z could include as many as 75 million people, which makes them a larger generation than the Millennials who came before them.

Generation Z is also the most diverse generation in modern history, and a majority of Gen Zers would prefer to live in an ethnically and racially diverse community.

The great news is that nine out of ten Generation Z adults are planning to use a real estate agent when they buy a home, meaning plenty of upcoming business for those who can attract Gen Z buyers.

Twenty-seven percent of Generation Zers agree that “understanding what I want” is an important quality in their real estate agent. Knowledge of the local market (18 percent) and experience (15 percent) were also noted by Generation Z as very important qualities in an agent. Only 9 percent noted the importance of negotiating skills and just 7 percent considered the cost of working with their agent an important factor. 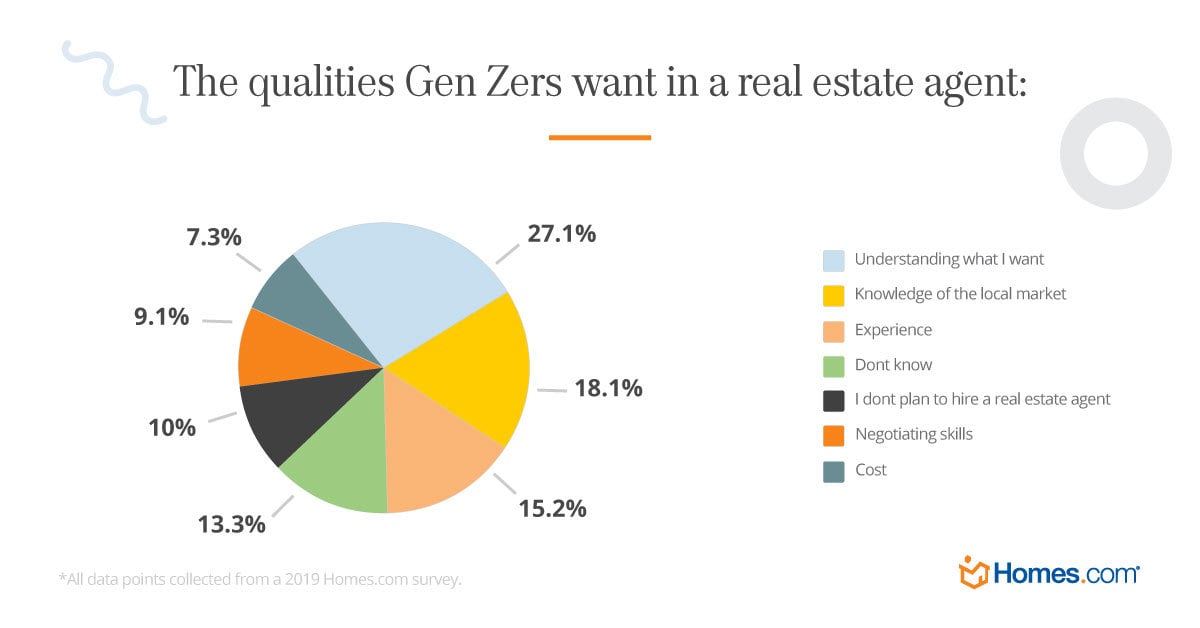 While 86 percent of those surveyed expect to buy their first home before they turn 35, the current overall homeownership rate across all generations is just 64 percent. However, those polled seem to understand the obstacles they are facing. Forty-two percent listed making enough money to afford a home as their top barrier to homeownership, with the second and third most cited obstacles cited being saving for a down payment (21 percent) and student loan debt (20 percent).

Most Generation Z buyers expect to put at least 11 percent down on their home, while a full quarter of those surveyed expect to save 20 percent of their home’s cost up front. Slightly over half of those surveyed believe that they will need to save for two or three years to save that amount unless they get some financial help from friends and family. However, the average first time buyer only offers 6-7 percent for their down payment. Informing Generation Z buyers about low down payment options could help them get into their first homes sooner.

To view the original article, visit the Homes.com blog.

Thank you for your inquiry.